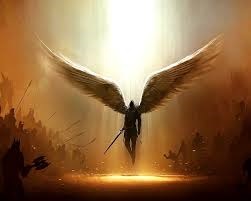 In one of my recent conversations with my mother, she reminded me that she is always praying for me. No conversation is ever ended without blessings being uttered. Same with my father. So here was my Mom, praying that God surround me with His Cherubims. I listened, and agreed. I appreciate all the support I can get. A family is one of those institutions that do not require legal registration for its validation, and mine has done its share of rallying around me to the point where my prayers seem terribly limited to an attitude of thankfulness.

As I thought of Cherubims, I smiled. I remembered the story of Jacob wrestling with an Angel (which he asked to bless him), and I thought that the Angel must have been a Cherub. Different Angels have different functions, and the Cherubims are the Angels that bless. We are in the realm of duality, so we have at least two versions of everything. There are arguments that Cherubims are big in size, at least like us humans, as in the case of those guarding Paradise. But there is the other opinion that refutes that, declaring Cherubims to be tiny beings, as evidenced on the Ark of the Covenant. The thought of Jacob fighting with a little fairy-like being was amusing. To the average onlooker he must have been behaving like a mad man lashing out at nothing for hours on end. The story does say he wrestled all night with this being. My goodness! Quite a sight.

Many of the Massage Therapists I have met exhibit some degree of spirituality which is brought into their work. Which tells me that at some level of consciousness, there is an acknowledgement that (part of) the role of the Therapist is to bless those to whom they administer. And it makes sense when I think of the use of the hands in the act of blessing in various religious sects. We are laying hands on folks (thankfully they are lying so they don’t have to worry about falling under the Anointing) and blessing them from head to toe; which could be a reason not to worry about losing energy, because if we are (intentionally) performing blessings, then it means a batch of Cherubims have been dispatched as our Aid.

It is generally accepted that there are spirits/deities associated with plants. In using vegetable or nut oils in our practice, we are automatically inviting/invoking the presence of the being associated with the plant that that oil came from. When we add essential oils (the essence/spirit of plants) to carrier oil, we are inviting even more spirits to the massage session in order to improve the efficacy of the healing. Which begs the question: If a massage is about techniques and muscle manipulation, why do we have a host of spirit beings present? Anyway, we can at least have the client advise us exactly which essential oil/s they prefer, or have a variety available for them to choose from, or mix mild blends in order to avoid an overcrowding of our space by the unseen…which could make the client feel overwhelmed (by what they can’t explain). They might casually remark that the oil does not resonate with them, or that it is too strong.

I am glad that we are living in a time when Aromatherapy, Colour Therapy, Music Therapy, etc. are accepted as normal, because there was a time in history when they were all considered witchcraft. Not that it no longer is, we are still manipulating the air, moods, hormones, etc., but with the stamp of approval from society. Amusing. Maybe we are the reincarnated souls of the witches who were tortured and burnt back in the olden days, and society, in its now repentant mode, has decided to allow us to practice our craft as a means of imploring our forgiveness.

For a number of Therapists, the journey to acknowledging the gift that they have, and actually using it, is not easy. Acknowledgment is sometimes difficult because we subconsciously know that we are actually carrying on the work of one of our ancestors. “Everybody is indebted to his predecessors, and it is only the egotistic or the ignorant who refuse to acknowledge it.” It may be an ancestor we met before they passed on, or someone we never knew existed. Our soul would have agreed to continue the work and this knowledge would have been later/gradually communicated to our brain, which often rejects the idea. But, one way or another, the baton is passed to us, and it is only a matter of time before we find our bearings and get on with the work.

I met a Therapist years ago who spoke of having that knowing feeling that she was special, but everything seemed to be working against her. For starters, her mother died when she was young and she went to live with an aunt who had all intentions of knocking any idea of being special out of her. So she was punished for the unexplained, and spent a good deal of time either without food, or locked in the dog kennel.

While she was talking, I was trying to find meaning for the actions of her aunt. I speculated that the Therapist may have needed to fast a bit. Fasting heightens our spiritual awareness, which justifies her aunt withholding food. She was simply being prepared early for the work she had to undertake. As for the kennel, I thought that she needed extreme lessons in loyalty and humility, or maybe she simply needed to get in touch with her animal instincts. That’s a joke…but maybe not. Anyhow, it all worked out. She is one of the most stanch Catholics I’ve met with a very sincere heart, for which she is well rewarded. We journeyed together for a few years before our paths divided.

One day she was telling me that she went to counselling with a Priest. Major changes were taking place in her life and it was very confusing. At the end of the session the Priest asked her if she ever saw the movie: The Matrix. She did. He advised her to look at it again, indicating that it was a very true depiction of stages in the spiritual development of the human. By her own confession, she found that in looking at the movie objectively a lot of unanswered questions were cleared up. Good for her. A lot of folks watch the movie for the stunts.

Honestly, I was surprised that the Priest made such a recommendation. But it was most appropriate, as the term ‘Neophyte’ is also used in the Catholic Church. And, as I recall, ‘Neo’ was Thomas Anderson before he started transitioning, so ‘Neo’ was not his new name, but rather represented the phase he was going through.

Another Therapist I met came from a Shouter Baptist background which she badly wanted to disown. Her mother used to do spiritual work for folks and had flags planted in the yard, and pieces of magnet (some of which are still in the roof of the house) in several places. Essentially, the yard and house literally housed beings that were exorcised from people. This gift was passed on to my friend at the passing of her mother. She spent years in denial of it, meanwhile herself and children suffered. I remember her daughter being always ill onto death. There was a particular creature living inside her (which my friend could often she when she looked at the girl) and it fed off her energy, constantly suppressing her immune system and tripping off her nervous system.

Of course, the Therapist wanted someone to come in and fix things for her. Several persons did try, but there was often a standoff. As I explained to her, protocol in the spirit realm is serious stuff. If her mother communicated to the spirit realm that her daughter is the new Boss, and such was endorsed, then they may not be tolerant of anyone else trying to command them. So the Therapist had to acknowledge her portfolio, in so doing, taking on the mantle left by her mother. When she stood in her authority much cleansing took place.

Doubt troubles us. It is one of the reasons for our halted healing. Nevertheless, healing is a process, and the changes she experienced were appreciated. Her daughter was delivered and is in good health. She has gained weight and is also successful at her studies. Among the beings/persons still present on the property is a man who lives in the mango tree at the back of the yard; he’s been there since the Therapist was a child. Whenever she is at the back of the yard, she avoids looking up in the tree. Whenever I go over during mango season, I acknowledge his presence and let him know I am only taking a few mangoes. I guess he is fine with that because no mango or branch ever fell on my head. Live and let live…energies of different frequencies can occupy the same space in a non-destructive manner.

Looking at the lives of Therapists from this perspective, the potential client is the one who should be scared of having his/her energy drained. Thankfully, they do not know half the drama. But we can see that some of the things that our clients complain about in the name of stress does not compare to some of the horrors that a Therapist may be going through. Yet, we find strength and support where we can. We brush off the dust of our most pressing issues, and we make the effort to be our best selves when a client enters our space. And it is good that we are dragged through the mud sometimes, it keeps us off the pedestal of self-righteousness and helps us to be more compassionate.

We are all at different points in our development, and sometimes we may be frustrated at some of the experiences we have, but may we trust that our God does not give more than we can bear, and hang in there. The wheel of karma turns…daylight comes. As we transition, may we allow ourselves to be open to the support of our loved ones in whatever form it comes. And if we are too angry, or simply don’t feel righteous enough to have a heart-to-heart talk with God, at least we should try to link up with someone who does. And may we remember that when we lay hands on our clients, it is a Divine process…let the energy of blessings flow.