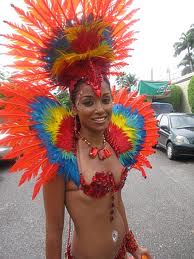 How was your Carnival?  Mine was quiet.  Remarkably, wonderfully quiet…except for the Jovert band that made a raucous along the Saddle Road early Monday morning.  When I got home from work on Friday, I did not leave my house again until yesterday.  That’s my idea of the good life.  So yesterday when I got a call to hit the road, I was ready, or so I felt.

I went to see a gentleman who said he was staying at Maraval Court somewhere near Burger King.  Maraval Court?  I told him I never heard of it, but I know where Burger King is, so he could meet me there.  Agreed.  When I got to Burger King, he was not there.  I enquired about Maraval Court.  No one knew such.  Excellent.  After all these years of doing outcalls, I am still in awe of my ability to get into such situations.  I took out my phone to call him and saw that he had sent me a text message.  He apologised for the misinformation and stipulated the correct address.  I made my way up the street, but did not find the place.  I sent myself to the top of the class for sheer brilliance.

I called him.  Told him where I was.  He suggested that I wait on the corner.  It was a crossroad.  I was the only person on two legs on that road.  Everyone else was on wheels…and they looked at me curiously.  Yea, like I was a lost puppy.  Then I saw him in distance.  I walked towards him.  We shook hands and smiled pleasantly like everything that just happened did not happen.  When we got to the compound, there was a barely visible inscription on the right side of the gate that reflected the information he texted me.  He pressed the remote and the gate opened.  We walked in.

Once inside, he stopped.  He explained something to me that I did not understand, so when he started walking, I did too.  He stopped.  This time he tried his best English, and with some effort I understood.  I was to let him go on ahead while I wait by the gate for two minutes, then I was to follow suit.  Really?!  You mean what I just went through to get to the location was not enough?  There’s more?  Good heavens!  Okay.  I waited.  I had an excellent view of Port of Spain and the gulf and I decided not to waste it.  More than two minutes went by before I proceeded to the apartment.  He held the door for me and I tiptoed in.  He looked at me curiously.  I told him I wasn’t sure that I was in the clear as yet, so I was threading softly.

He explained that the ‘Director’ of the condos lived in the apartment directly in line with the gate, from which position he monitors the goings and comings.  And, given that the apartment was not his (he borrowed it for Carnival) he had to limit any activity that may breach unwritten/unspoken codes.  Well, the Director should see the inside of that place.  I asked him if he was experiencing Autumn in there.  What?  Autumn, I repeated.  He wanted to know what was that.  Winter, spring, summer, autumn, I said.  No!  He laughed.  Clothes, cushions, wares, even leaves were on the floor.  He must have had a ball in there.  And he probably offended the Director.  And now I was paying the price.

We skipped over this and that and headed upstairs to the bedroom.  There was Autumn in there too, but view was breathtaking.  I washed my hands and stood enjoying the view while he lay on the bed texting.  After a while he enquired whether I would be doing the massage.  Yes, but you are not ready.  No?  No.  You’re on the phone.  He did not know that he could not be on the phone and have a massage.  I told him I did not know that he could have been gyrating on the streets on Tuesday and sitting in a pew praying at the same time.  He put away the phone.  The massage got started.

His English is bad because he does not have much scope for practice.  Why so?  He is French.  Oh!  The only Frenchman I know is the Merovingian in Matrix Reloaded.  Who?  What?  That was a joke.   You’re not supposed to have to say that a joke is a joke.  That kills it.  I forgave him.  He’s French.  I wanted to ask why he wasn’t visiting Paramin, but I might have to explain that too, so I let it go.  He is from France, but migrated to Africa.  Africa?  You live on the whole continent?  No.  In Gabon.  Gabon?  Okay.  What is the massage industry like there?  Massage?  Not much.  A few Moroccans.  Chinese mostly.  Chinese in Africa?  Yes.  Chinese everywhere.  True.

His lower back was the suggested area for special attention.  He has been taking the 2-day journey from Gabon (Gabon to Paris, Paris to Canada, Canada to Trinidad) for years just to participate in Carnival.  And he ensures that he does all that a Frenchman can do in an English country, then he crawls back out of Trinidad like a broken toy.  I never did know how to party, so I listened intently.  When the massage was over I returned to the washroom and soaped my hands with the Dial stuff.  It is easier to get the oil off if you don’t wet your hands with water first.  So I lathered up then turned on the tap.  No water came.  I twisted and turned that tap and only got a few drops.  He was still in bed, back on the phone.  I told him my plight.  He said that that has been happening for the past few days.  Really?  In a posh area?  I tissued the soap off my hands.

We returned downstairs.  He suggested that I try the washroom there.  There was a trickle.  I made the best of it.  Then he opened the door, went outside briefly, and returned.  He told me that the gate was open, and that I could make my way out.  However, should I get to the gate and find differently, I am to wait two minutes and he will come and open it.  Sweet Jesus.  I said my goodbye stepped out the door.   And there was the Director.  He stood looking on as his companion shuttled food warmers from the car to the apartment.  She had just arrived so the gate was still open, but barely so.  I would have had to run like hell to get through it.

I opted for the most leisurely pace I could find.  Even after the warmers were in the house, the guy was still watching me.  I guess he wanted to see how I was getting out.  There was a pipe by the gate.  I used the opportunity to better wash my hands.  When I looked up, I saw him in the doorway of the upper flat looking at me.  Then he stepped aside.  The Frenchman, with his perfect timing, quickly came outside, aligned himself with the gate from the distance, pressed the remote, and we waved to each other.  And there ended my not-too-aristocratic outcall massage.