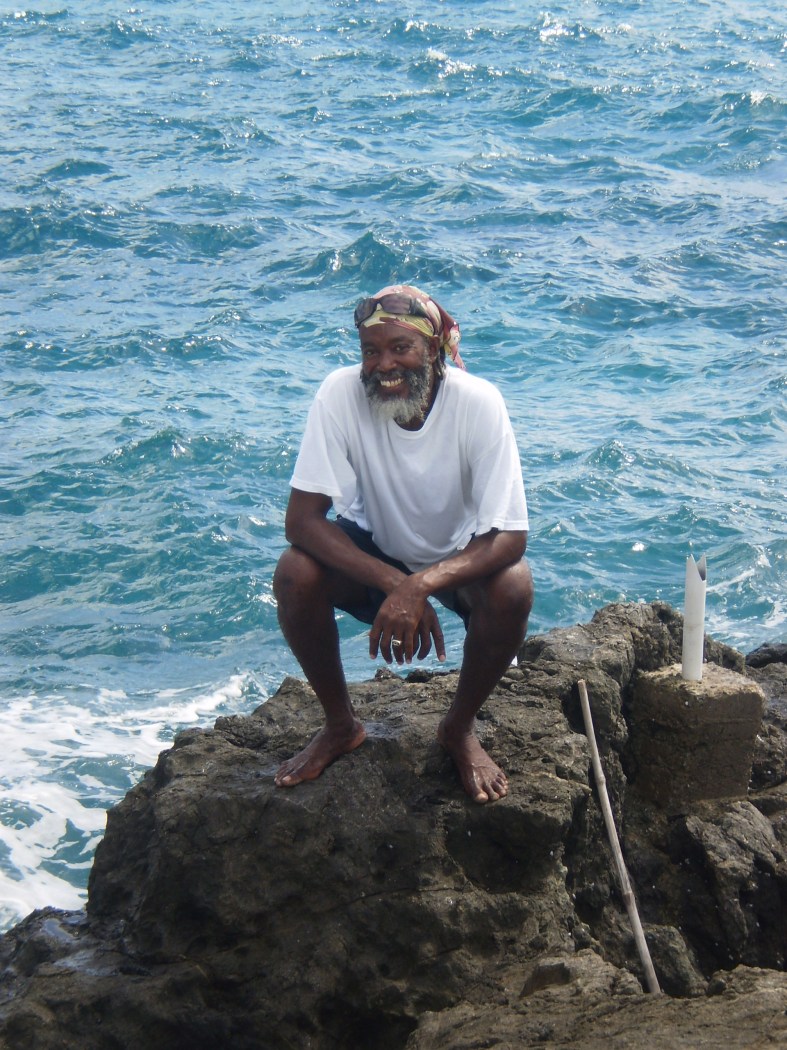 I was preparing to go and visit an old friend on Sunday afternoon when Sandra, a Massage Therapist from Tobago, sent me a text message. Her text asked whether I knew that Nathaniel (aka Mr. Natty) of Lambeau had died on Saturday (April 13). My stomach lurched. I immediately went into denial. Nathaniel showed up at my door back in 2009 in response to a newspaper ad I had posted. He came to do the massage course. He had the most questions that day…testing me to his satisfaction. When the class was over, he stayed back ask me another question: whether I would do a massage for him. Now? Yea, before I go back to Tobago (which was on the afternoon ferry). I was starving and needed lunch, but decided to do the massage then share lunch with him. I went to wash my hands and returned to find him naked on the massage table. I had a moment of shock. Who is this guy? He did not think much of it and offered a towel he had in his bag for draping.

Over the course of our journey I understood that he was a Scuba Diver who took tourists to see the beauty of the underwater life in Tobago. He finished the course in 2010, but scuba diving remained his focus while he questioned his ability to truly step into the massage market place. In February 2011 he called to say that he was coming to Trinidad to buy his massage table. I met him in Port of Spain and he was his usual excited self and I was glad that he was finally taking this step. By mid-year it was clear that he had made his mark…on the tourists. Some were checking into the hotel and asking: who is Nathaniel? They wanted to have a massage (as they had heard) on the hotel grounds under the dungs tree. Sometimes it was at sunset, but at all times they were serenaded by the sound of the sea lapping against the shores.

At times when he was uncertain about how to treat a particular condition, he would call and ask me. I did not encourage this for long. I remember telling him once that I am shutting him down, no communication, he has to find his own way. I didn’t have all the answers, but even if I did, I felt that I would be delaying his self-development if I kept playing the role he wanted me to. I wanted him to come into his own without my shadow hovering. There was silence between us for a few months. Neither of us was into groveling, so that worked fine. Then he called early last year to say he was coming to Trinidad. He had seen a yellow Jimny that he liked and wanted to buy. We met again and the effervescence was there and I heard so many stories that I smiled until my cheeks hurt. I was so glad for him. It was through him that I met Sandra as he had recommended that she do the course. So after reading the text and having a moment of flashbacks, I called Sandra and she told me about the accident on the highway near Signal Hill.

We spoke briefly about him, which was appropriate as Nathaniel was not a topic, he was an experience. Those who knew him knew: you loved him, or you loved hating him. He had a domineering personality.  I took it a step further and called his business phone. The person who answered told me I had the wrong number…even after I explained who I was. Fine. I then called his private number and heard his very upbeat voice message which included: Shalom. The next day I called another Therapist to whom he had introduced me. We spoke briefly about some therapeutic workshops that he is planning to hold and he said that over the weekend Nathaniel’s name came up several times as it was his intention for him to be involved. He said that he had not called him about it yet as ‘you know Nathaniel, he is a kinda headstrong guy.’ Yep. It was then that I told him Nathaniel was in an accident. And while he was expressing hope that it was not too bad, I went on to further advise that Nathaniel died. Words gave way to silence. There is something very unreal about saying Nathaniel is dead. I suggested that he could have a moment of silence, and he promised to do more than that.  He said that he was ‘enter the light’ and interact with him there.

And amidst the sorrow that his departure brings, I am filled with pleasant memories of him. I remember that he liked to laugh aloud and he liked loud music.  He was born on September 4, 1958. (Born on a 4th day, died in the 4th month, April, on a 4…the 13th (1+3=4)…while the Moon was leaving Taurus, which was his Moon sign…interesting departure) .  He wore something white most of the times, and he loved yellow. On one of his visits last year he showed me a yellow car on his camera.  Said he had seen it and loved it and had finally worked out an arrangement with the owner so that he drove it as a taxi during the mornings, and did his massages from afternoon.  His head was often tied with a white or yellow bandana, or the remains of a white t-shirt.  He loved burning incense and scented candles.  He kept his possessions few as if he was in transition.  I also remember him telling me: You’re a nice girl. I like you a lot. You know that? Yea, I like you a lot. But daaamn! you’re crazy. But don’t worry about that, the parts of you I want sure ain’t crazy.  On another occasion he asked whether my wardrobe had space.  Then he said I should shift my clothes to one side so that his could fit and he would live a few months here with me, and I’d live a few months in Tobago with him.  I told him that did not sound like a husband and wife arrangement.  He said: Don’t play with me girl.  Don’t play with me.  I’m a veeery serious guy.  I don’t need a wife, and you know you don’t need a husband.  So when you decide that you don’t need a husband, you give me a call.

Yes, that was Nathaniel. He was always encouraging me to pack up shop here and go to Tobago where we could work together. Each time he suggested that I would ask: and who will teach? He insisted that the students can find another teacher. True. But I am happy to be able to help those who are seeking certification to realize their dream, and while a massage business in Tobago is lucrative/attractive, there is fulfillment in what I do here, so I have declined the euphoric experience of running off with him to make waves in the massage industry. So while we both did massages, we were not in the same place mentally.  I remember that in the presentation of his business plan in class he had indicated that he intended for me to work for him.  I was taken aback.  He had a plan for everyone in his life.  In his plan we were going to rent a place he had seen near Penny Savers where he felt we could generate a steady flow of clients.  He had intimated that having had a near-death experience prior to living in Tobago, he had developed an urgency about life. Time was important.  If you sat around too long, he would say: Chop! Chop! Time to get moving. Apart from that he was a former USA Marine (Nathaniel Marks) and the experiences he had were of a certain diversity and intensity that the average Caribbean person won’t usually amass, so he had difficulty settling into Tobago. I remember him expressing impatience at the pace at which things were done. Too slow for him. But inside all his hyperactivity was a man of meditation, he did Yoga and had days when he would turn off his phone and hang out at the beach.

I told someone that Nathaniel could not have died wearing pampers in a Home for the Elderly having suffered from Alzheimer’s. No. Not at all. He had to die in a ‘big way’ with all the drama and excitement that he was full of. I could imagine him looking down at his body saying: Daaamn! I’m out my body! Then laughing loudly. But this time was not like the last time, he was not going back in.  Based on what happened the last time he knew fully well that to re-enter his body meant becoming aware of the severity of the damage through excruciating pain, not to mention prolonged hospitalization and rehabilitation that would follow.  No.  Not again.  He was better off outside.  The person wanted to know if I was being insensitive or if I was serious. I meant what I said. That’s the Nathaniel I knew. And while his death denies him physical access to us, he is present. So Nathaniel I say to you: Thanks for coming into my life and leaving beautiful footprints. Your journeys from the African safaris to Tobago’s coral reefs may have been flamboyant, but now it’s time to move on to more picturesque scenes. Do not linger here longer than you need to.  Your dreams and times of meditation have allowed you access to realms of higher vibrations where loved ones dwell, where communication is by intention, where movement is lucid, where the music and beauty are beyond any comprehension we can muster in our dense state, where time is no longer linear.  You’ve always been a free soul, so now we release you to continue your work in the higher dimensions.  And for those of us who need to be comforted, share with us some of the beauty of where you are and we will hear you, see you, feel you with our hearts.  Shalom.